Films I think about on Valentines day

Most days I like to think that my life will turn out just like a film that I have watched.  Everything turns out okay,  the bad man turns good, people that struggle get a whole new start in life.  I say that but most films that I like to watch are infact about true life and actually I love them because they are real and I can identify with them.  Examples of that in the last few weeks that I have seen and would recommend are Dallas Buyers Club and Blue Jasmin.  Both my kind of films.  Anyway getting back to Valentines day I tried to think back to my youth and all the loves that I have had and lost and moved on from and so I came up with maybe not valentine films but films that i watched with ex boys because it seemed romantic to do so? Anyway the first movie that springs to mind is ‘Scent of a Woman’  I actually loved that film and really want to watch it again now.  The second and well i was young again ‘The Body guard’ not very cool but i wanted someone to say  ””And Iiiiiiiii will always love yooouuuuuuu’. mmmmm perhaps I might stop there.  Okay also cheesy Meg Ryan films again lost cool points for that and I did have a good run at liking the notebook.  But all short lived however i do sometimes want to feel comforted and just feel the need to put on some cheese.  The more I think about this tonight the more i am unlikely to update this but for now I will stop.  But I will finish by saying sometimes a bit of cheese in your life is good for the soul.  It lifts you up when you are down.  It allows you to go into your safe bubble.  A place where I like to be when I feel vulnerable.

Art Work By The Naked Painter

Woman Sitting With Pants On

Homage to Modigliani No2

Flowers in her hair

Two Nudes And an Apple 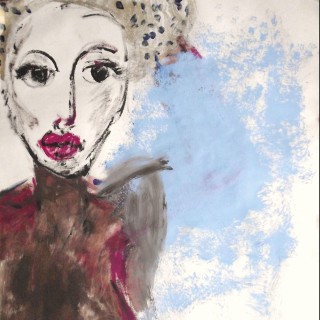